Get me outta here!

There was no such thing as middle-aged when I was a kid. Humans were either young or old. Had I been forced to make the distinction and recognise the semi-greys in my midst, I would probably have muttered something about how they were only interested in trainspotting, golf and stamp collecting before taking off on another charity shop run, praying there might be a suitable smoking jacket available at the Cottage Hospital Shop this time round. Youth is truly wasted on the young Oscar Wilde devotee.

Never a fan of hobbies that didn’t involve the pub or football pitch, I’ve recently found myself drawn to some of the activities that once made me shudder. In Yangon over Christmas, while my energetic paramour was busy capturing the street life around dusty Insein station, I was stopped in my tracks by an ancient British steam train, which I proceeded to stalk, pet and document as if it were a great white rhino and I was a flying vet. 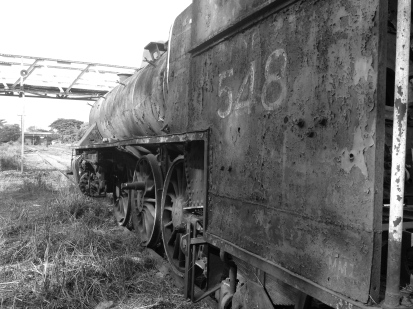 Fortunately, my left-handedness (and an imagined shortage of suitable clubs) has long provided me with a ready excuse for avoiding golf, meaning I needn’t reveal the real reason why I must avoid this game at all costs: I have an apocalyptic temper when it comes to putting small balls in holes and am only a marginally better loser than the President Elect. However, as I queued to post items back to the UK recently, I found myself supping from another holy grail of the middle-aged – philately.

Entranced by an advert for a new set of stamps sporting pencil drawings of Hong Kong by a Mr Kong Kar-ming, I began daydreaming about using them to begin my own modest but meaningful collection. Yet far from making my smug purchase and sliding contentedly into metaphorical slippers back home, my thought process then accelerated towards some of the more reckless actions of my unthinking youth. Soon I wasn’t in a very comfortable place at all.

When my grandfather, Les, died in the mid-1980s, death was a remote concept. I was too busy coming to terms with my own awkward identity to fully imagine someone else’s. Les had been suffering for months. It was his time. End of story. But that sense of remove wasn’t to last long. I inherited some items from Les, including his electric razor. Fiddling with the head some months after his death, I managed to send hundreds and thousands of salt-and-pepper stubble flecks into the sink. Horrified by this visceral reminder of his being, I was forced to confront the truth: I hadn’t simply lost a relative, I’d lost a living, breathing person – and before I’d come to know him properly.

My reaction to this injustice was as mature as you might expect from an undiagnosed child prodigy with a thing for second-hand smoking jackets. I turned to something else I’d inherited. Les had asked friends and colleagues to post him matchbooks from wherever they travelled. Some of them were pretty cool. Pretty soon I was using these matches to light my Camel cigarettes. Why not? Life was short and unfair. It could all go up in smoke as far as I was concerned. After the shaver had been abandoned, and most of the matches used up, my attention finally turned to Les’ stamp collection.

Unfortunately, rather than learning my lesson from recent conflagrations and recognising the stories behind the hordes of miniature images, I merely saw the stamps as another means of funding my teenage lifestyle. A friend and I took Les’ stamps to Birkenhead indoor market, then a den of iniquity populated by intergalactic bounty hunters, spice traders and chippies. On the way to the stamp dealer we passed a stall selling unused matchbooks commemorating recent weddings: ‘Dave and Emma, 15.12.88’, ‘Sammy & Sheila Forever’ etc. A misprint or mismatch – what did it matter to us? We snapped up a few to calm our nerves.

I can picture the specialist stamp stall – how a sliver of outdoor light pierced the unflappable sheets of stuck-fast goodies – but not the dealer’s face. Possibly it was too middle-aged for me to process. Or perhaps I was too nervous, or guilty, to look him in the eye. The transaction itself was quick and merciless. We were told the stamps were nothing special, that he’d be doing us a favour if he gave us a few quid for them. Lies, most likely, but we’d come all this way so…the deal was done.

The money we made soon vanished, leaving me feeling angry and ashamed. What would Les have thought about our loss? A scientist, a man of numbers – it was one thing to jettison a family heirloom, but to get so little remuneration in return?

Years later, my uncle told me that the biggest danger Les faced during the war while spotting for enemy planes was an ARP colleague with an itchy trigger finger and penchant for whisky. He had a cigar every Christmas but was otherwise no fan of smoking either. In retrospect, I think Les would have been happy that we made so little to squander from his stamps. He might even have reminded me that what goes around comes around (provided sufficient postage has been paid). Either way, this post is my apology to him, coupled with an acceptance that one Christmas soon those left-handed gold clubs are coming my way.

Griefcast, Cariad Lloyd’s funny and poignant podcast about grief and grieving is well worth a listen: https://soundcloud.com/griefcast